After spending two days on Magnetic Island, we were ready to explore Townsville attractions. After jumping off the ferry, we drove to our Discovery Caravan Park and set up our camp.

I had a little surprise when I took my power cable and wanted it to connect to the power box. Inside I found a green frog. It looked artificial, and I thought it was a park gadget, and you have to pick it up to connect your cable.

Once I moved my hand closer, the frog slightly moved away from my hand! I understood the hint – ‘no touching’. I think she found a home here and was happily resting. It did not intend to go anywhere, and our refrigerator was defrosting in the heat.

I decided to put the plug into the powerpoint millimetres from the frog. And nothing happened. The frog must have seen people connecting cables many times because her eyelids did not twitch.

Later we learned that in the wet season, green frogs are common as they like humidity and moist places.

Later on, we decided to try the giant slide at the pool and relax a bit.

In the late afternoon, we drove to Castle Hill.

Our first impression of Townsville was excellent. We started sightseeing by visiting Castle Hill to see the town from the top.

Castle Hill is a small hill located in the middle of the city. It is a trendy spot for walking, running, strolling and primarily viewing the city from the top.

There are many lookouts and also a few short walks. The view from the top is magnificent.

Also, it was our second time to see green frogs sitting near the drinking tap. Gosh, they look so artificial! It was hard to believe they were real!

It was dark when we first arrived at Castle Hill, and we could see the Magnetic Island and Townsville Marina from the east side and Mount Stuart and town suburbs from the west side.

There are not many places like this in Australia where you can see a big town from so high and close. When I compare Castle Hill to Hobart with its Mount Wellington lookout, Hobart still is the best as it is much higher.

On the way back from Castle Hill, we could see many historical buildings that were lit nicely, and they looked stunning. Also, the city atmosphere with its pubs and restaurants open and aroma spreading around were so good.

As we like local markets, the next day in the morning, we went to a Townsville Rotary Markets.

We walked around the stalls soaking the market atmosphere. Here and there, we heard music in the background.

I was able to knock myself with magic singing sticks to the accompaniment of the didgeridoo played by an Aboriginal man. Of course, I immediately lost my rhythm. I was too fascinated by the sound (it was an imitation of a kookaburra call) coming out of a giant trumpet.

It was nice, but Nell was scared of a man with weird colours. Unfortunately, we did not take our camera so we cannot share any photos here.

Castle Hill during the day

On the way back, we again drove to Castle Hill to see how the town looks at daylight. Again we were not disappointed as the hill offers 360-degree stunning views. It is just a matter to move from one lookout to another lookout to see the far expanding horizon.

The next day we visited Reef HQ Aquarium which is one of the best Townsville attractions. It is the largest living coral reef aquarium in Australia. It has Coral Reef Exhibit, Predator Exhibit, a children’s section, a gift shop and a café.

We stayed there for three hours and enjoyed the place. They have so many marine species and exhibitions that it takes time to see everything, but it is worth it.

In the middle of our tour, we went to a marine movie at IMAX Theatre. The theatre has a giant dome-shaped screen. The sound system was simply unique.

The movie was great, and because of the large screen surrounding us, we had to turn our heads around to see everything. So, we had a really good time at Reef HQ Aquarium, but more was coming.

Our child, who was in the cinema for the first time, turned out to be a bit of a problem. She acted as if she was sitting on the couch in the trailer and kept asking loud questions all the time.

Threats and requests for silence did not help. Nothing worked as she was so excited. It’s good that there weren’t many people, and somehow we made it through to the end.

In the evening, we drove up to another lookout – Mount Stuart. It is an overlooking Townsville mountain with an elevation of 584 metres. The road is pretty windy but nothing difficult.

When we got there, it was about sunset time to enjoy the incredible views and take outstanding pictures.

There is a walk around the top to see the nearby town with Castle Hill and Magnetic Island in one line and surrounding mountains and hills. It was beautiful, and we were happy to tick off Mount Stuart from our list.

Museum of Tropical Queensland is a museum of natural history and archaeology. It is located next to the Reef HQ Aquarium that we visited a few days ago.

The museum houses artefacts recovered from the wreck of HMS Pandora – one of the most significant wrecks in Australian waters. The Pandora sank off north Queensland in 1791 after capturing some of the participants in the infamous mutiny on the Bounty.

We had an opportunity to see creatures from the depths of the ocean. For example, it was a fish with a rat’s tail that lives 1200 meters under the water surface.

Also, there was an exhibition of a variety of corals. One of the exhibitions showed deep water creatures with all the pictures and descriptions.

Everything was presented so well that even Nell found it encouraging.

Over time we learned that museums in Australia are so well organised. Wherever possible, everything is presented interactively and with simple instructions. It encourages kids to learn and explore more about the artefacts and stories behind them.

We spend three hours walking between three levels and viewing so many things that we did not know about.

After visiting the Museum of Tropical Queensland, Nell wanted to have a splash, so we drove to The Strand.

The Strand is a thriving beach foreshore. It is where you can relax and find activities for the whole family. There is a 2.5 km path going along the shore where you can view Magnetic Island, go for a run, ride a bike or scooter or simply have a picnic.

If you don’t feel like preparing your lunch in one of the park barbeques, you can go to many cafes and restaurants around The Strand. Kids can have a splash in the water park, and adults can enjoy fishing on the jetty.

The day was beautiful, so we spent all our afternoon in The Strand before going back to our caravan park.

The last thing on our list was to go for a walk in Town Common Conservation Park.  Kasha wanted to see dancing brolgas again.

Town Common Conservation Park is located north of town and has an observation tower, lagoon bird hide and a few walks. Our focus was on birdlife, and we were lucky to find brolgas again.

Finally, I was able to take a picture of a dancing brolga that is quite unusual. Further down the park, the walking tracks were a little overgrown, and I think it was due to the wet season started already, so not many people are coming now.

We walked to Jacana and Freshwater Lagoon bird hides, but we did not see many birds. It was late already, and we had to come back, but at least we found some brolgas and a few other birds.

On the way back, we passed this house in Townsville that is poles 90 % placed on metal poles, and the whole structure is hanging off the cliff. Impressive, but we would not like to leave there.

Castle Hill at sunset – best among all Townsville attractions

We loved Castle Hill so much that we had to pay a visit one more time and take some great sunset photos on the way back. It is such a great place to relax. If you are in Townsville, you must visit it.

Our visit to Townsville came to an end, and our next destination will be Airlie Beach. When you prepare for your trip to Cape York, make sure to add Elim Beach to your list. Even if you decide to go no further north than Cooktown, a daily trip to see the famous Elim Beach Coloured Sands is a good idea. The main activities in Elim beach are camping, fishing, 4WD driving,… 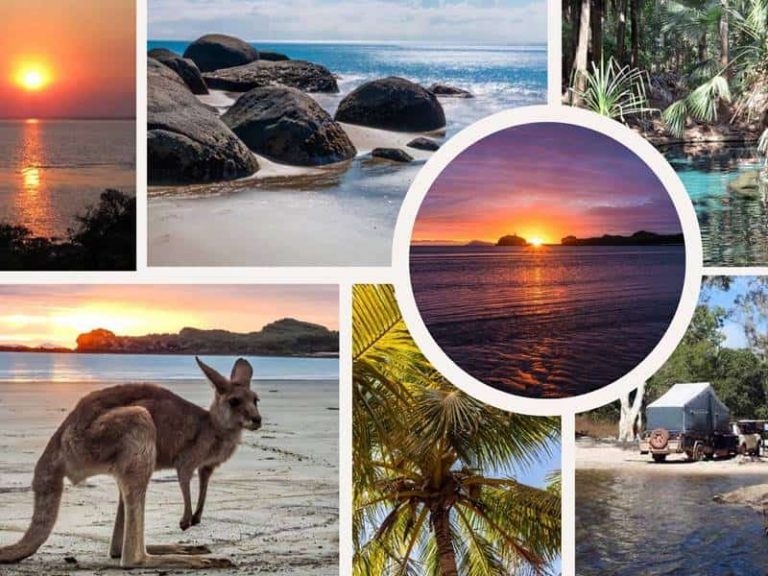 Australia is a vast and beautiful country with many outstanding places to set your camp. Read about our best camping spots in Australia that take your breath away. From the red outback deserts, through the rainforest wilderness to wonderful white sand beaches and azure waters of mainland Australia. We have seen many of them and… 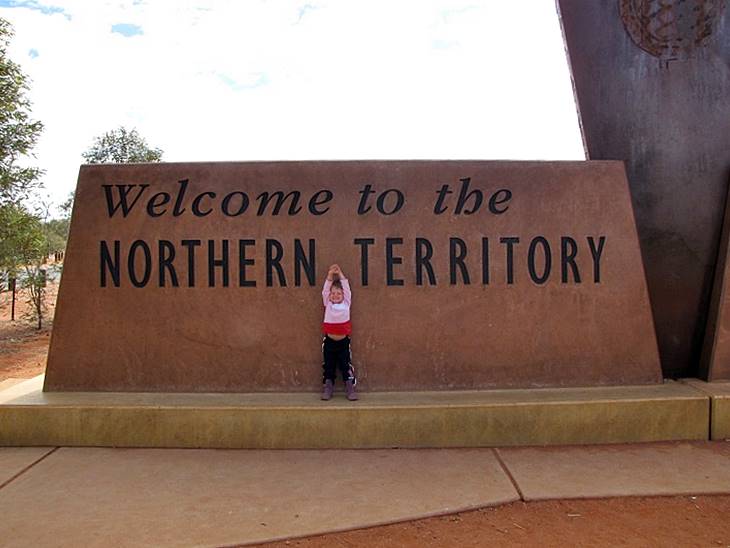 Agnes Creek – First Free Camping After a busy four days in Coober Pedy, we headed north to see the Red Centre. As the distance to Alice Springs was still 690 km we stopped at a free camping ground at Agnes Creek.  Agnes Creek is a huge free campground on Stuart Highway with a lot of…