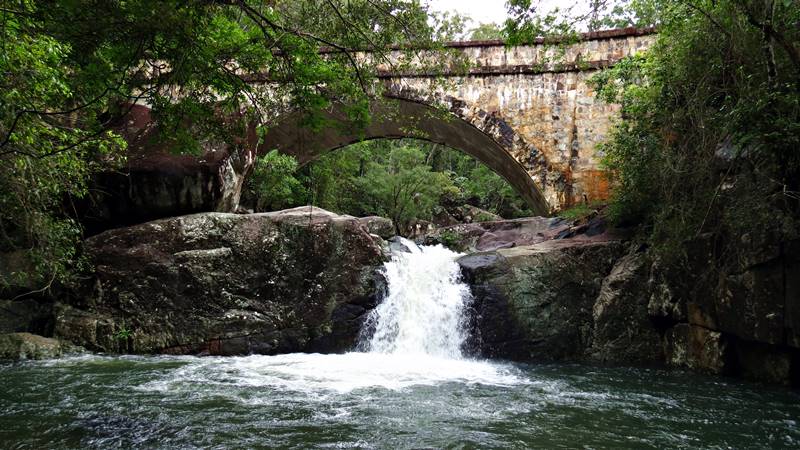 We wanted to see Paluma National Park, so we stopped in Rollingstone Caravan Park.

Rollingstone Caravan Park is located 62 km north of Townsville, 3 km of the highway, right at the shoreline. It offers various accommodation, including villas, cabins and camping sites.

It was the middle of December, so there were not many tourists around. The weather was humid with constant heavy overcast and rain dropping from time to time.

We saw giant palms at the entrance, and they looked lovely and tropical. Once we checked in and entered the park, there was a surprise. We saw two artificial lakes that were part of the park. I think it must have been a fish nursery or something similar in the past.

Nowadays, these lakes are located in the middle of the park, and they are part of the caravan park.

Further down, there are numerous power sites at the beach, two amenities blocks, and a swimming pool. The beach is pet friendly and it is an off-leash area.

The swimming pool is nice and big with an artificial waterfall and a cave where you can hide from the sun.

The next day we drove up to Paluma National Park. On the way, we were passing many pineapple plantations. For a moment, we thought to stop and get a few, but we dropped that idea.

Paluma National Park is the southern gateway for the Wet Tropics World Heritage Area. It allows viewing the change in vegetation from the coast to the mountain range.

The lowland forest is drier and open. It only changes to a moist and dense rainforest around Paluma.

Again the drive was pretty steep but worthwhile. On the way, we passed many tiny waterfalls that were flowing off the rocks. It was just after a rain, so they were boosting. The weather on the top was cooler, so we could have a proper breath after the humidity down the coast.

Little Crystal Creek is famous for its arch bridge, created in 1933. The arch bridge was constructed with only help from two tractors and a couple of trucks. Workers use hand drills, sledges and dynamite to extracts stones from the surrounding landscape. The construction of the arch bridge lasted two years.

The place is nice with a picnic area and some tables near the bridge. We walked around, seeing the water flowing very quickly from the cascades on the top.

The area is known as a Forest Kingfisher place. The bird can be seen flying through the picnic ground or resting in nearby trees, but we did not have luck.

Then we drove to Paluma. Just before town, there is a McClellands lookout.

It was only 150 meters to the lookout, where we could admire stunning views. There was also a loop track that goes around the area. The track was named after the Paluma’s Mount Spec Road officer in charge.

There is a track to Witts lookout and Cloudy Creek from the lookout. We only saw the first lookout and, due to the rain, we drove further.

In Paluma, unfortunately, this time of the year, everything was closed, so we could not even go for a coffee. Thus we drove further to see Lake Paluma and Birthday Creek Falls.

We wanted to drive to Lake Paluma and see Birthday Creek Falls, but we did not know the dirt road was closed too, so we had to come back.

We parked in town and went for a short rainforest walk.

Then we walk along the main road and saw some historic buildings. We felt the tropical, mountainous atmosphere of this place and liked it very much.

We started to understand why staying north is not such a good idea. Very often weather did not permit us to see all attractions we wanted. It is not that it rained, but instead, the dirt roads and walking tracks were closed many times.

The next day, we were planning to leave our trailer in Townsville and visit Magnetic Island for two days. We have heard it is a great place!

O’Reilly’s to Binna Burra walk is the first part of the three-day Gold Coast Great Walk. This walk is officially called a border track on all hiking maps as it separates Queensland and New South Wales. The track has many side smaller tracks where you can deviate and do additional lookouts or waterfalls if time… 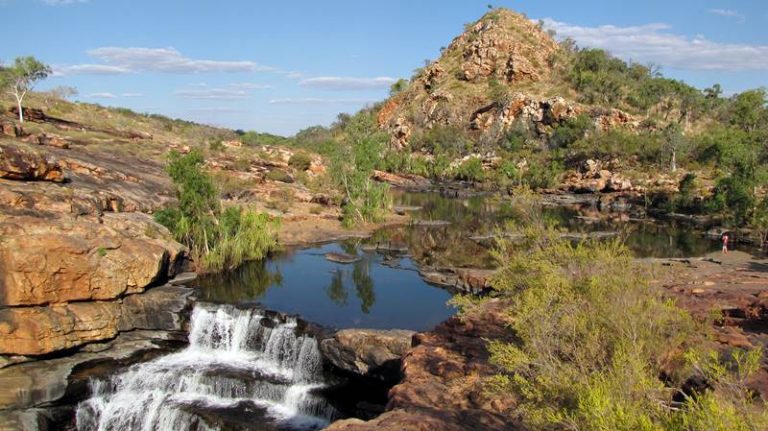 In the next part of our Kimberley adventure, we were planning to see 4 stunning Kimberley Gorges. The next day, in the afternoon we arrived at Mt Elizabeth Station that was located 30 km from Gibb River Road. There was a sign at the gate saying that we were entering Mt Elizabeth station and that we shouldn’t… 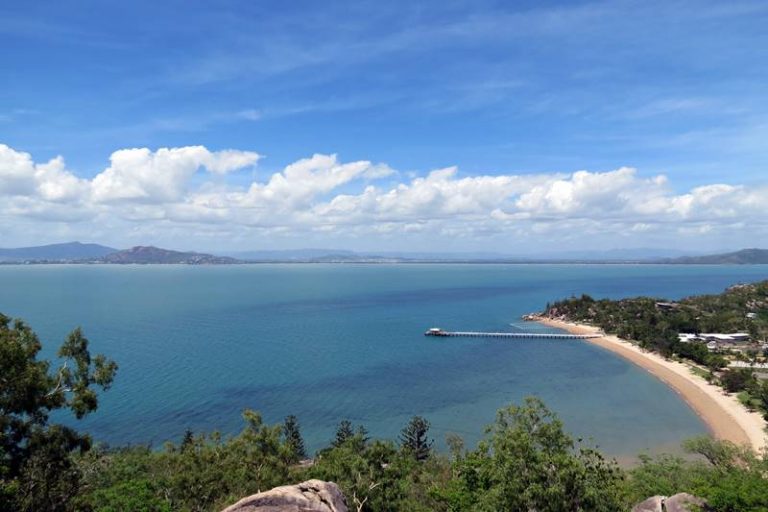 We have heard so many different things about Magnetic Island that we decided to check it ourselves.  Magnetic Island is situated only 7 km offshore from Townsville Harbour. There are two types of ferries: passenger and car. We wanted to explore the island properly so decided to take our car.  The car ferry with Fantasea… 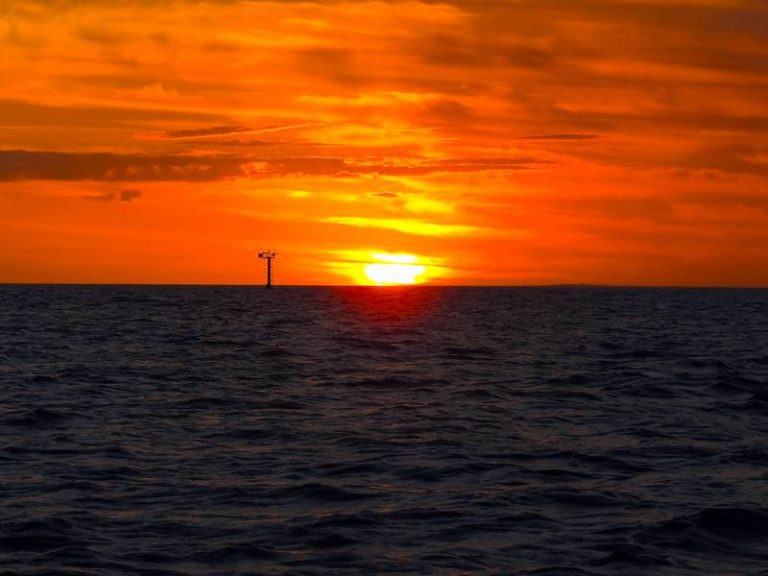 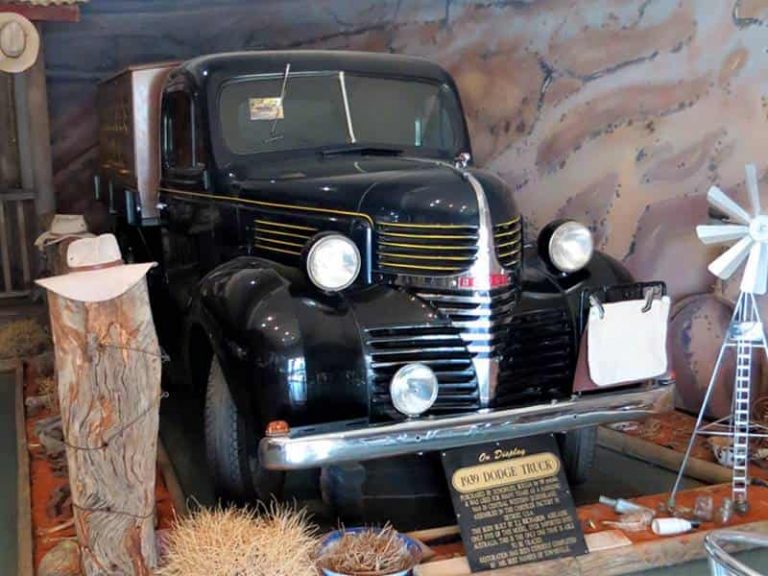 Despite car technical issues we decided to drive inland to explore Karijini National Park.  The bitumen road was picturesque but more often flat and boring. We drove 330 km in total emptiness with no trees, mountains or even small hills. Just grass, only grass. Dales Campground – Eastern Karijini National Park Further inland it was very…