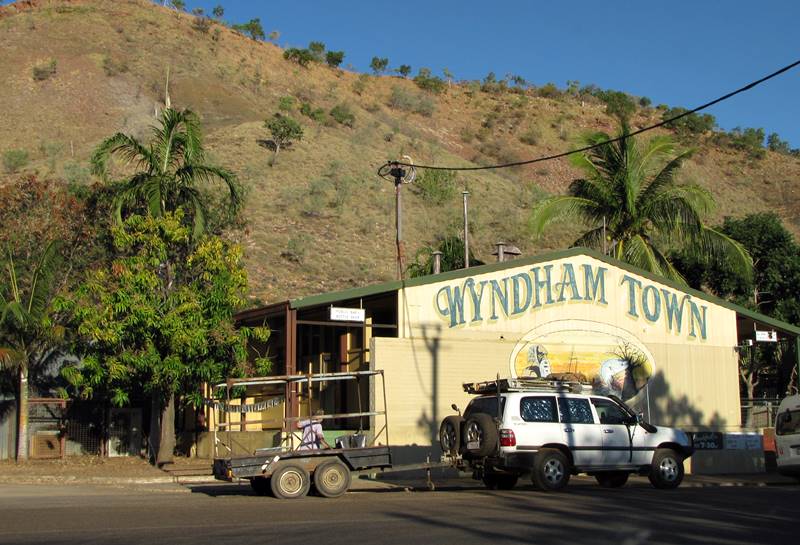 The road to Wyndham meandered through the mountains. There were no lanes to overtake slower vehicles, and sometimes we trailed for miles, waiting for a long stretch of straight route.

Just before Wyndham we stopped at The Grotto that is located 20 km from the town. The Grotto is a set of small canyons filled with water and a running waterfall in the wet season.

Currently everything was dry to the bone and only at the very bottom of the canyon there was a waterhole and people could swim there. We were the first ones there and we could admire the whistling kites flying around us and the lazy monitor lying on the rocks.

It was beautiful and wild and the scattered rocks added a lot of drama to this place. After some time, people started arriving and in a very short period of time, the area was packed with tourists, so we drove away to Wyndham.

Wyndham is located at the mouth of five rivers: King, Pentecost, Forest, Durack and Ord River in the Cambridge Gulf.

Wyndham has a population of 3,000, but it is actually just a few houses on both sides of the road. We were welcomed by a huge, artificial saltwater crocodile that sits at the edge of the town.

I really liked the atmosphere of this place. I could feel it’s the end of the world forgotten by everyone.

People were in no hurry and everything seems to be temporary. Maybe because the weather here is so unpredictable? There were big signs by the roads informing about the cyclone status, so this probably is true. And I can bet Wyndham could be an interesting place in the wet season.

Our camping was also one of a kind. Everything there was made of corrugated steel sheets. A friendly donkey named Fazzi walked around the campsite asking for a piece of carrot or two.

The gentlemen wear long beards having bulging bellies, and kites circled around us.

In the evening we went to the viewpoint, famous for the fact that 5 different rivers connect in one place. We were there on a low tide and could mainly see the riverbeds and places where the water had receded.

The view from all sides was fabulous! We were planning to go there again, but this time at high tide.

In the morning we went to see the birds at Parry Lagoons Nature Reserve that is located 11 km from Wyndham. Unfortunately, we missed the turn sign hidden in the grass and we drove around for an hour. It was already a little late to see birds at breakfast, although one lost jacana wandered through the water lilies.

Next, we visited the ruins of the telegraph station, which consisted of two chimneys and some crumpled iron. This place was worth a visit, as it was situated on a small hill with a 360-degree panorama.

We could see wetlands, bottle trees, rivers, and distant mountain ranges. Then we walked back across vast plains covered with grass. Traces on the trial indicated that the whole place was flooded in the wet season.

On the way back we visited the Afghan cemetery in Wyndham. Afghans settled these areas at the end of the 19 century. They transported goods between towns with the help of camels and donkeys.

The graves we saw were twice as large as normal, and this is because they were buried with their lead camel!

At sunset, we went to the port. It is actually one street with a few tin huts. There were baobabs by the road, and everything looked beautiful in the setting sun.

On our way to the port, we visited a kangaroo living in the ruins of the former residence of a municipal official. The house was never completed due to the distance from the town and the fights with Aboriginal people.

Returning to the campsite, we visited the old cemetery, which looked picturesque in the setting sun. People were dying really young here, roughly when they were 20 years old.

It’s almost the end of July and time seems to run really fast.

We were about 3 weeks behind our schedule. We discovered today that we lost track of what day of the week it is. I think we have fully relaxed on this trip already.

We enjoy every moment of our adventure in the beautiful Kimberley region where we are only limited by the horizon.

In the morning we set off on a rocky, but the very picturesque road. Marius missed the exit again and we had to go back …

We drove through the dried backwaters, crossed the river, visited an Aboriginal house from hundreds of years ago, and admired their taste in decorating rocks.

We have seen a billabong with beautiful lilies, and the air smelled of decaying carcasses. It is possible that the crocodile has put something aside for later on.

We also visited a Diggers Rest station. We hoped that we would have lunch there. Unfortunately, the owners were away, because they took a group of people for a 2 week horseback trip.

As a result, we ate our own provisions. Nell made friends with a young goat and we had a moment of peace. We liked this place very much as the people were very friendly. I felt like in the movie ‘house on the prairie’.

Before we left, we noticed that one of our car’s headlamps was unscrewed due to the corrugations. Marius went to fix it.

In the meantime, an emu joined us as our car interested him very much. Later on, the emu wanted to take a ride with us. It was committed to taking us somewhere because it was standing by the driver’s door.

Nell, on the other hand, wanted to take the goat with her. We categorically told her we do not take any hitchhikers.

On the way back we stopped at an old bottle tree that in the past was turned into a temporary prison. The bottle tree was that big, the police kept people in it for the night when they travelled with prisoners on the way to the town.

On a return to the caravan park, we enjoyed the sunset at the newly discovered billabong. At sunset, the billabong was full of different kinds of birds.

I managed to take some picturesque photos. We returned to our camper in the dark and we could finally try out the additional front lights. They work!

Today we had a preparation day: shopping, checking all car fluids, and tightening the screws.

We were forced to do it because we discovered the indicator completely unscrewed itself and fell into Marius’s hands while he was washing the car.

On the other hand, the carrots we had just bought for the road were given to Fazzi, and Nell was delighted. We were leaving the next day. The laundry is done, two tanks and two jerry cans are full of diesel, and two refrigerators are stocked with food.

I think we are prepared. And we are finally going to experience the famous Gibb River Road!

Is there a shorter way to get to Home Valley from Wyndham?

If you want to pass Emma Gorge and El Questro you can take Old Karunjie Road. It is a scenic 4WD track that is not suitable for big trailers or caravans.

The track length is about 80 km. Starting from Wyndham drive to Diggers Rest Station, have a cuppa, and then hit the dirt again. On the way, you drive through some mudflats at the end via a rocky section.

On your left, you see the Cockburn Range and on the right mudflats. The views are spectacular.

The track ends at the east side of Pentecost River crossing on Gibb River Road.

Is there a scenic drive directly to Kununurra?

Parry Creek Road is an alternative if you want to avoid bitumen. It is a dirt road that starts 15 km from Wyndham. On the way, you pass Parry Creek Farm (great camping), Mambi Island, Buttons Gap picnic area.

After that, the road meanders through Livistonia Range (beautiful falls in the wet season) and ends at Ivanhoe River crossing.

Please note this crossing is very dangerous and often it is closed due to high water levels and saltwater crocodiles.

As an alternative, you can take Valentine Springs Road that joins the highway to Kununurra.

Read our story from Kununurra and the surrounding attraction. 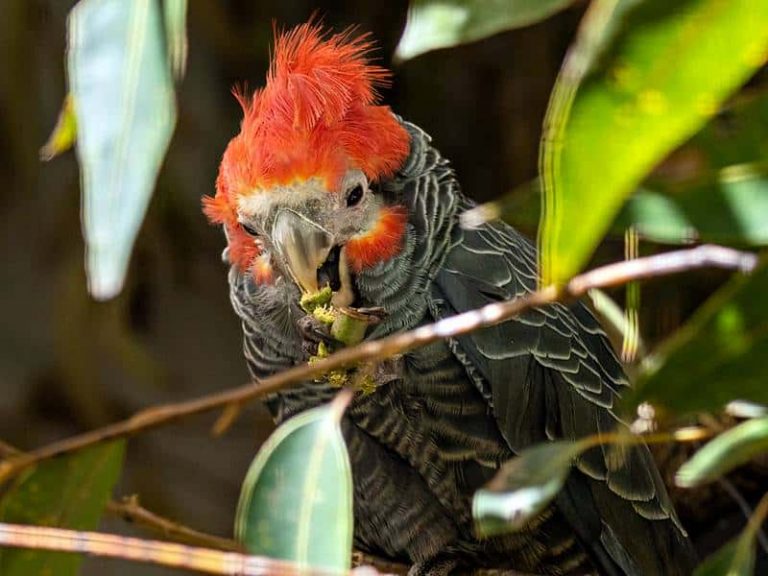 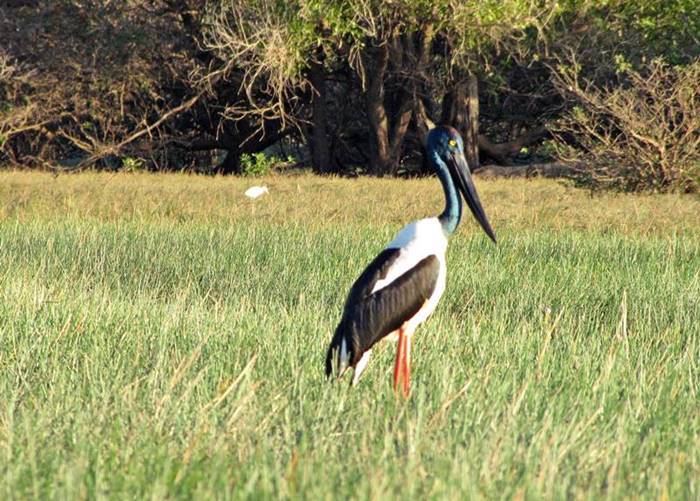 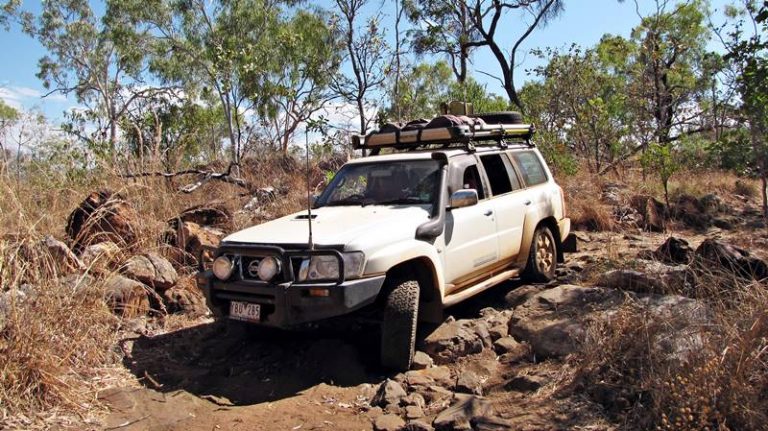 The Australian water dragon is the largest dragon lizard native to easter Australia. It is not as big as the Yellow Spotted Monitor, but it has an interesting, confronting look. It is very easy to be spotted in parks around Sydney or Brisbane. Interestingly, they are not scared of humans and are easy to tame…. 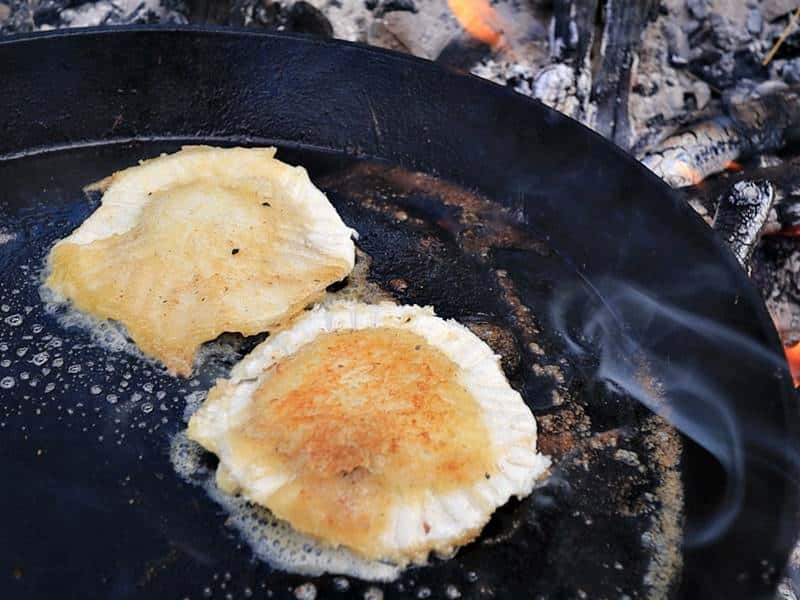 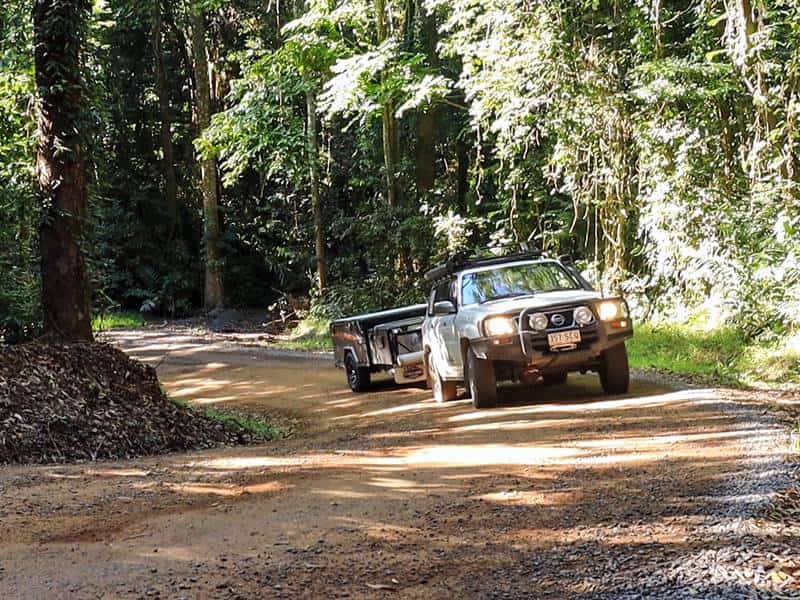 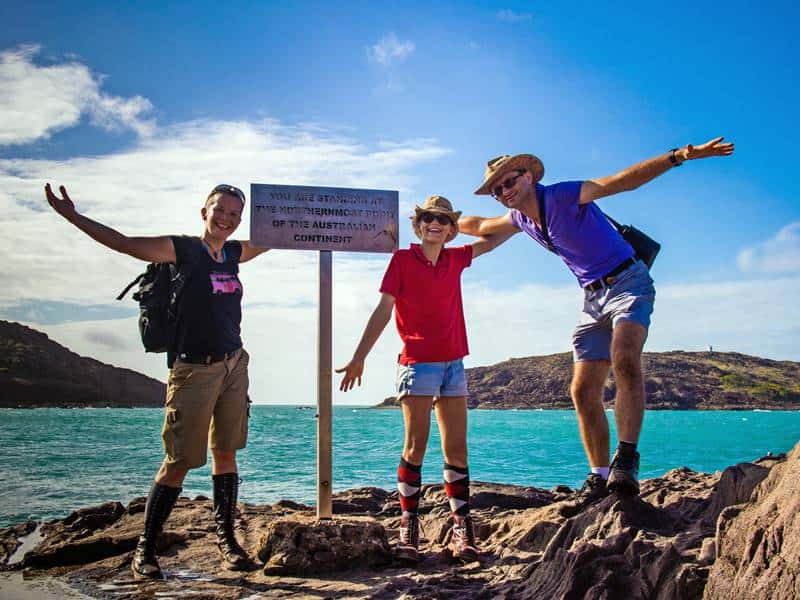